How to connect a C/C++ process to a Java application

A question recently came up in the lab on how to connect a Java visualization to a C process, after a bit of thought I discovered that there aren't too many sources that have documented methods so here are a few I came up with that work along with example code.

The first and probably the easiest method on Linux/Unix based machines is to use a FIFO. mkfifo is available on OS X, Linux and probably on Cygwin (I haven't confirmed this). Using a pipe created with mkfifo from both the C and Java standpoint is as easy as opening and closing a regular file. To begin the process we start off by typing

where pipename is the name we would like to give our FIFO.

Next we have to set up the C and Java executables, the example program below reads in numbers from ap.txt then averages them in the compiled code and sends the result to the Java VM application to be printed.

The code for the above example can be downloaded here: javaio_fifo.tar.bz2

To run the code, change the javaio_fifo directory then type:

When executing, you should see (illustrated below) "JAVA SIDE!!" followed by the total, number count and average from the c process. 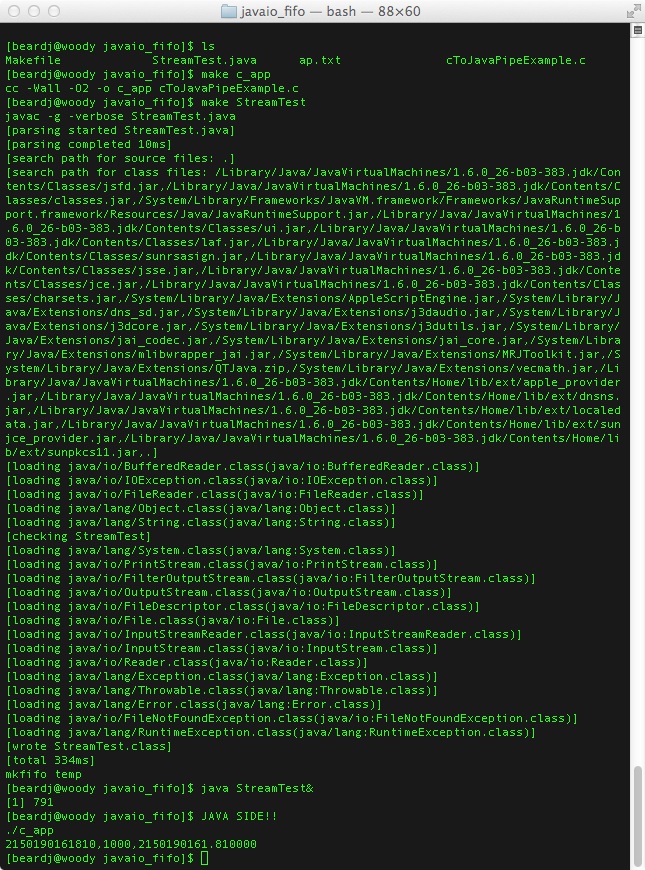 The second method opens a pipe directly from the C/C++ process using the popen( "target process","w").

Modifications to C Code above

The Java process on the other hand changes to read from stdin input stream.

Modifications to Java Code above:

The full code base can be downloaded from: javaiopipes.tar.bz2.
As before change directory to the javaiopipes directory, run the same make options as before only this time no FIFO is created. To run the two applications we only need to invoke the C process by typing: 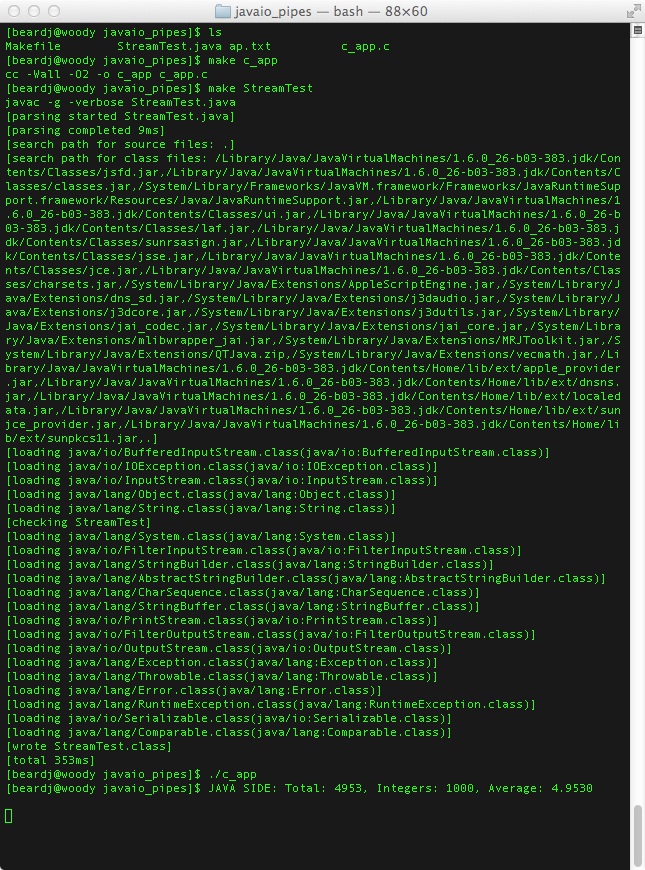 A third method is a slight modification of the second method. We still use popen but in this case we send data as raw bits instead of ascii encoded strings. Java reads numbers in big-endian format (see what is endianness) whereas C/C++ reads them in little-endian format (at least on x86 architectures) so we have a choice of either converting the numbers going into the pipe first to big-endian or converting them on the Java side once they are pulled out of the pipe. In my code example I've chosen to use the C method htonl() to convert the byte order in C.

From the code we see that we generate two random unsigned 32-bit values, convert the endianness using htonl() and then write the values to the pipe using fwrite. I've used htonl, however you could just as easily use htobe32, however I've had issues using endian.h on OS X. This operation would be more efficient if I added the two 32-bit values into one 64-bit vector however for the sake of clarity I left the two writes.

The Java implementation reads in a list of two integers at a time and stores them in an ArrayList data structure. This method can be generalized all Java data types, however care must be taken when sending Java unsigned values since Java only has signed types.

The code for this example can be downloaded from here: javaio_pipes2.tar.bz2.

To run the example change the directory to javaio_pipes2 then type:

Once c_app is executed it will open a pipe using popen() to the Java application then send through pairs of 32-bit values which are then read and stored in an output log "java_output_log.csv" and "c_output_log.csv" to convince doubters that this works you can run

and these two should match.

We've seen that OS level pipes and FIFOs are useful to communicate between the JVM and a compiled (C/C++) process. These principles can easily be applied to other language types (which is why I chose to highlight them). Another (perhaps more performance oriented) way to communicate is through POSIX shared memory, and it follows the same path as the last example. One complication with shared memory is the platform specific location in which you'll open it (e.g., OS X, typically leaves the SHM file handles within the current working directory, whereas Linux will put the SHM handle in /dev/shm by default). If you want to try out the shared memory approach, check out the simplified SHM library from GitHub (https://github.com/jonathan-beard/shm), and integrate it with your project. You'll have to open it from the Java side like a normal file and parse the input. If I get time I'll update this tutorial with a Java FIFO example to make this more concrete. In the interim feel free to drop me a line and suggest improvements.